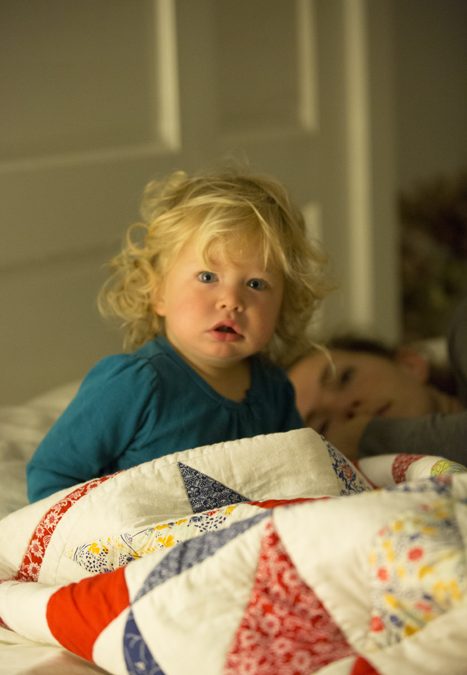 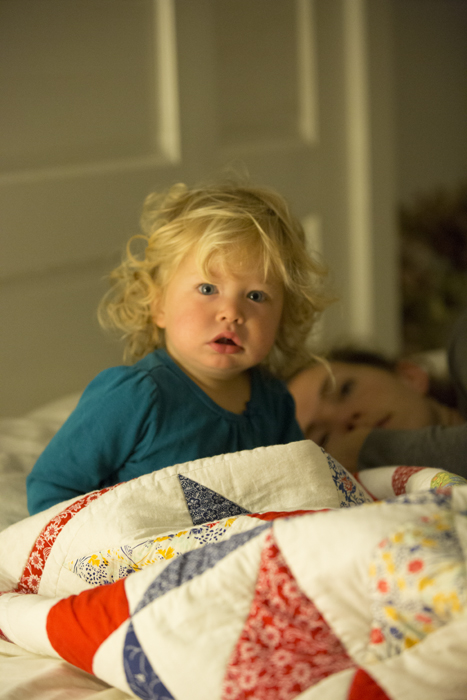 I just passed a night of attempting to sleep with a congested toddler whose idea of sleeping with me is to push herself as close as possible and then proceed to squirm in peaceful bliss for the remainder of the night. She slept well. I imagine Dan also slept better than I, down on the couch (Not that I begrudge him, he’s been doing his fair share of night time caregiving). I then awoke to two tousled heads peeking through the door asking if they could give me breakfast in bed. A little later I crunched on some daddy fried bacon and eggs with a hot cup of tea. Of course I shared many bites and sips with a toddler and almost four year old, however, Kathleen later shared her bacon with me, partially chewed, so it all evened out in the end.

It’s Dan’s day off so I didn’t have to hurry out of bed quite as quickly this morning. So I’m sitting typing with Cecily leaned against me coloring on one side and an unclothed, still potty training Kathleen “cuddling” on the other side. I add quotations simply because her idea of cuddling is much like her sleeping. She believes that cuddling is a constantly in action experience so she squirms in closer here, needs to find a comfy place for her head, perhaps she should sit on me, now the blanket on, now the blanket off. “MAMA!! I need go PEE!” After a few cycles of rinse and repeat, both girls have made their way downstairs where I will also soon be joining the fray of another day. Soon.

Last night amidst the head bashes to my nose and kicks to my gut, I had a detailed dream about parenting with a couple that we were acquainted with a few years ago. They wanted to know what kind of parenting philosophy I believed in. My dream explanation was a scattered at my real life explanation would be. I don’t think they were impressed.  I think I dreamt about this because I’ve been thinking about my parenting a great deal the past few days.

Before I had children, I was quite a patient person. In fact, I’m embarrassed to say that I somewhat impressed myself with my ability to interact with my students or other children with relaxed, even temper. And then I had a child. I realized that in my quest to raise a perfectly delightful daughter, I easily became frustrated, annoyed, and oh, yes, even mad. But, I had the tools to control myself as I responded to my daughter in appropriate ways.

Then life got hard. I found myself fighting against revealing the angst inside with my reactions and responses to my girls.

And then life became really hard. As I felt helpless and hurt by things unrelated to my kids, I began to feel rage boiling inside of myself. More and more it began to spill over in how I parented. I no longer found that I had the tools needed and I could see the effects beginning to show in my relationship with my daughters. But, I sought help. I wasn’t willing to allow more time to pass before I faced the issues that needed facing and allowed someone else to advise me in how to parent beyond my frustrated, impatient and even angry responses.

A year after taking that step, I’ve seen my relationship with my daughters flourish beyond what it had been before when I was only learning to control myself. As I learned to accept the grace given to me, I became a much more grace full mother. I’ve eased into a role of more patient responses, non-reactive discipline, and a more loving attitude that has done much to build trust within my girls. They really do trust me.

But then, there is nothing like a period to test all of that. We’re going on three weeks of sickness, our entire little family is. With flu, cold, and nasty cough for the three girls, mama and daddy alike, sleep has become a rare commodity. We’re just limping through the days so that we can have another nights sleep disturbed every hour or so by one of the three children vomiting, coughing, or asking for a bath at 2:00 am. During the day, lots of shows for little ones who rarely have screen time, copious amounts of nose wiping, and dutiful ingestions of cod liver oil, elderberry syrup, and hot lemon and honey. And in the midst of that, I’ve realized that I haven’t totally been rid of my old self. The annoyance is still there. The frustration at the whining or other petty behavior still exists. The anger at unkindness shown or mean actions still tends to reveal itself in words and looks that are also unlovely.

But I’m getting there. Not perfectly. Not quickly. But getting there. I don’t imagine that my daughters will ever be able to say that I never got mad or annoyed. They will probably never rave about my perfect patience. I hope though that they will say that as I encouraged them to make appropriate choices in their anger or frustration, so I also did the same for myself in my responses to them. I hope that they will say that my love for them was revealed in my actions and reactions.  And I hope that as they grow and change over these next years, so will I.

But for now, as a snotty nosed two year old rotates between “cuddles” and wrestling with her equally snotty nosed older sister, it’s time for me to stop thinking and writing so that I can get to it. She’s laying across my arms now anyways so I think that’s probably a signal to stop my sleep deprived wanderings. Where ever you may be in your own parenting journey, I wish you much love and grace this morning.