To the designers of children’s bathing suits 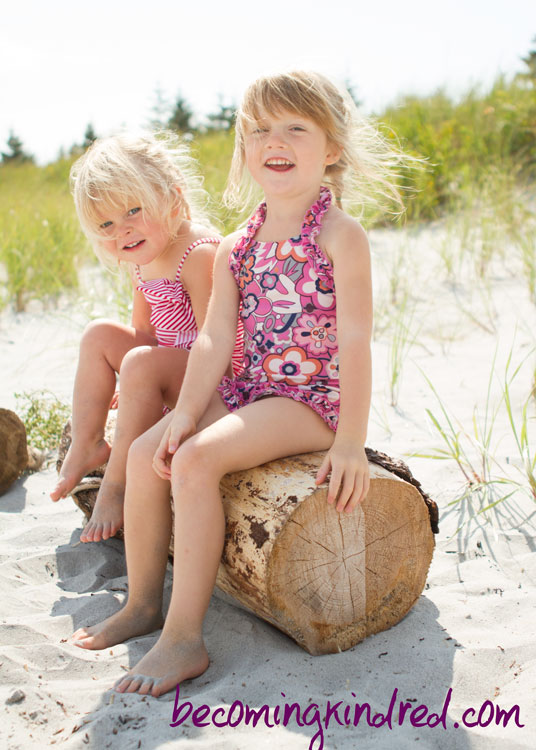 Today I went looking for a bathing suit for my five-year-old daughter. The warm weather is here and we realized that last years was too small. I loved the bright colors and patterns that were available, just beautiful. My delight was short lived as I pulled bathing suit after bathing suit off the racks though. I’ve heard it said that clothing companies design according to the consumer wishes so even though I’m just one mom, I thought I’d add my voice.
See, my daughter is only five and she hasn’t developed breasts yet so she doesn’t need a plunging neckline or anything to support what isn’t there. Strapless and off the shoulder really don’t work well for the five year old. She also won’t require ruching on the sides to accentuate her curves, because, well, she’s pretty lean and lanky right now. And the high cut of the legs? Frankly, the only thing that does is give, ya know, a “wedgie”. I’m not even going to get started on the impractical little bikini tops to be matched with a selection from an array of shorts. The shorts were super cute by the way.
So that’s what my five year old doesn’t need in a bathing suit this year, but I thought it might be helpful to also know what she does need.
She needs something that is high enough cut and fitted on the chest that the straps aren’t constantly falling down. That’s super annoying during swimming lessons; she’ll be trying to get her salamander level this summer and she’ll pass if she can swim two metres. I’m always so proud when I see how much fun she is having. The bottom is best low enough to prevent the aforementioned issue, you know, the wedgies.  One pieces stay in place for active five year olds so they tend to work best. Bows and ruffles are really great as long as they aren’t over the top, we want cute but practical. I think that’s it.
My daughter loves the beach and has many plans of building sand castles, being buried in the sand, practicing her swimming, and collecting shells and sea glass. She’s also eagerly awaiting going on a water slide; that girl loves a rush. Really, she’s just a little girl who wants to wear a nice bathing suit that was designed specifically for a little girl’s body. She just wants to be comfortable. She doesn’t need a suit that looks like a miniature of a grown woman’s suit with a childish print. She isn’t trying to make it look like she has curves where she doesn’t because she doesn’t even know yet that our culture puts such value on those things. I’d like to keep it that way for a long time.  She has many, many years to be a woman and only a short few to be a carefree little girl. Please don’t rush those short years by making clothing that sends the message that she needs to grow up quickly. I’m doing my very best as her mama to teach her now that there is so much more to her beauty and value than what she looks like so that when she becomes an adolescent, teenager, and then an adult she won’t succumb to the immense pressure to be “sexy”. I want her to play freely in the sand with joyous abandon this summer and I’d love to see her clothed in a way that allows her to do that.

Thanks so much for your time and for listening to my concerns,

Just one mama of a five year old.

← The unromantic side of farm life. (A post without pictures) ← Farm Journal Edition: A Broody Hen